Note: This is part one of a three part series. All three parts were published on Michigan Quarterly Review. Part one, two, three. 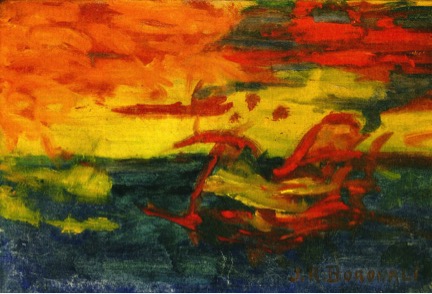 “Anything that’s in the world comes from something else, so everything is culture, or everything is nature, depending on how you wish to define these words.”

At the 1910 edition of the Salon des Indépendants in Paris, a messy, muddled painting of a sunset over the sea was exhibited. Titled Et le soleil s’endormit sur l’Adriatique (Sunset Over the Adriatic) (above), the picture was presented by the artist Joachim-Raphaël Boronali from Genoa, and was said to be a part of the “Excessivist” movement. The Excessivist movement did not exist, and neither did Boronali. Both were the invention of writer and critic Roland Dorgelès. Dorgelès and a few friends attached a paintbrush to the tail of a donkey named Lolo, a mascot and entertainer of sorts kept at a Montmartre bar called Le Lapin Agile.

Lolo the artist donkey is little more than a footnote in the history of Montmartre—filled with pranks, anarchist agitation, and ribald cabarets—and an even smaller blip in the history of the 20th century avant-garde art. The historical moment and various settings of this prank, Le Lapin Agile and the Salon des Indépendants in particular, were among the sites of radical transformation that forever changed the way art was created and viewed. What if Lolo was more than a footnote? What if the painting made by a donkey’s tail had been a turning point that set the trajectory of the entire history of art in the 20th century?

We only have the history we have, but in this series of blog posts I’m going to explore how things could have turned out differently. As is happens, there was a prank that radically altered the course of art history in the 20th century, but it was not Lolo the donkey, it was Marcel Duchamp’s Fountain (1917), a urinal turned on its back and signed with the pseudonym “R. Mutt”. A century later, contemporary art is still negotiating the implications of taking Duchamp’s joke seriously. 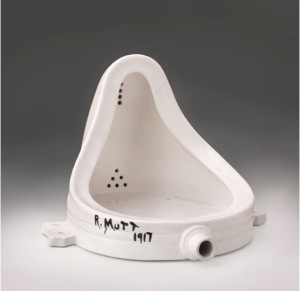 Given that the first few decades of the 20th century featured so many radical and inventive experiments questioning the nature of art, it’s worth considering what would have happened if a different joke had been taken seriously. Duchamp’s long shadow was not inevitable. It is only one of many possible historical trajectories whose certainty is an illusion propped up by randomness and social influence. Lolo the Donkey could have provided a framework for the 20th century avant-garde that would have been just as provocative and fruitful as Duchamp’s urinal, focused not on the artist’s ability to declare common objects to be art, but instead on the universality of the creative impulse among all creatures and abolishing the distinction between nature and culture.

Before we consider what an alternative avant-garde with a donkey for an idol might look like, we should better understand the context in which this prank was hatched. Jokes, after all, are as good an indication as any of the essence of a particular time and place.

The defeat of Napoleon III and the massacre at the Paris Commune in 1871 created a sense of malaise among the artistic and intellectual population of late 19th century Paris. This environment, particularly in Montmartre, proved fertile ground for experiments in art, theater, and poetry that dramatically reconsidered traditional, academic notions of beauty and artistic merit. In 1882 Jules Lévy began a series of exhibitions known as Arts Incohérents, featuring artwork by non-artists, use of unorthodox materials, and creative practitioners of all sorts operating outside their discipline. A series of dinners called Bon Bock became a platform for a new sense of French identity based on a combination of liberty and humor. This relishing of humor and rule breaking took on the name fumisme (1). Fumisme was a strategy of living, not just a style of humor. It was an approach to life that was politically incorrect, had no social agenda, and was meant to counteract the hypocrisy and pomposity of society. 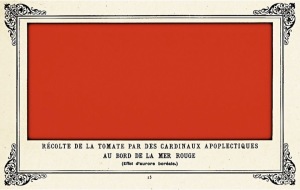 The Hydropathés, a regular meeting of artists and poets at a Montmartre cabaret, offered a democratic forum for art. A key figure in the group was Alphonse Allais, a poet, prankster and embodiment of fumisme who perpetrated a number of jokes that can now be read as precursors to conceptual art, including monochrome paintings and a score for a musical composition that consisted of complete silence. These lighthearted experiments were done in the 1880’s, decades before Kazimir Malevich and John Cage would repeat the gestures with a considerably more serious tone. The Hydropathés group went on to form the Salon des Indépendants, where Lolo would later make his artistic debut. 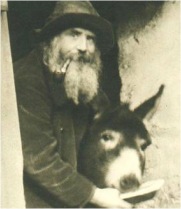 Lolo belonged to Frédéric Gérard, the kindly and eccentric proprietor of Le Lapin Agile, a Montmartre cabaret frequented by artists and intellectuals. Le Lapin Agile was named Cabaret des Assassins until 1880, when André Gill painted a signboard for the establishment that featured an anthropomorphized rabbit jumping out of a pan while deftly balancing a bottle of wine on his paw. Regular customers then gave the cabaret the name Le Lapin Agile (The Agile Rabbit) as both a reference to the spritely creature, and wordplay on the artist’s name, lapin à Gill (French for “Gill’s rabbit”) (2).

The image was well loved among patrons, who adored it precisely because it was a low image. They liked that it couldn’t work in a formal academic setting. The countercultural attitude fomenting in Montmartre at the time made a point to elevate low culture like the signboard to masterpiece status as a way of registering disdain for the prevailing hierarchies of high culture (2). Gill’s signboard was painted at a time when there was heated debate about whether to give amnesty to the Communards (leftist revolutionaries of the Paris Commune) who had been deported to New Caledonia. There was a popular notion, depicted in contemporary cartoons, of native Caledonian cannibals waiting to eat exiled political prisoners. Depicting the rabbit in a pan, or “a la casserole” (in the pan, in the hot seat), along with a working class hat and a red bandana, was a subtle but pointed critique of the treatment of the Communards. A more overt statement would not have survived government censors. The image is cheery, but hides a threat to the prevailing hierarchy. It could be about revenge; perhaps this menacing little rabbit would cook you if the tables were turned (2).

It’s either a remarkable coincidence, or an example of a consistent brand of critical humor born at this particular cabaret, that Gill’s subversive and anthropomorphized sign hung at the very same spot where Lolo would paint Sunset Over the Adriatic years later. Comparing humans to animals and animals to humans is a fumiste tactic to make the point that no one should take themselves too seriously.

Others used anthropomorphism as an absurdist gesture in Montmartre at the time. An 1882 illustration advertising the famous cabaret Le Chat Noir by proprietor Rodolphe Salis features an anthropomorphized cat and directly references Gill’s signboard in both the pose of the figure and the setting, with the Moulin de la Galette windmill in the upper left (1). Instead of a pan and a bottle of wine, the cat has a camera. There’s a line of anthropomorphized animals lined up in front of him, which includes, perhaps prophetically, a donkey. Le Chat Noir also prefigured the tactic of deliberate deception of the audience. Exaggeration, deception, and outright lies were all in the aesthetic toolbox of the fumistes. The journal produced by Le Chat Noir announced Salis’ death as a practical joke, duping earnest mourners into visiting the cabaret to pay their respects (1).

Tactics that employ playful and ethically questionable deception lay the groundwork for a divided notion of audience that runs from Salis, to Dorgelès and Lolo, to Duchamp, and on through to the present day. When an artwork doubles as a prank, or in-joke, who is the audience, exactly? Often, the audience can be divided into two groups. The first are the ones who are in on the joke, which could be specific to the artwork/prank at hand, or a more general sense of awareness of how notions of authorship and beauty have been upended. The second group is not in on the joke. They’re the earnest viewers looking for traditional notions of hard work and virtuosity they assume are the hallmarks of the true artist. For these traditionalists, an artist’s identity and accomplishments are supposed to form a clear line to the pleasurable experience of the viewer. What happened with Duchamp, and not Lolo or other art-pranks, was that the art world collectively decided to be in on the joke, and take its theoretical implications seriously. As we will see, things did not need to turn out this way, and the history that transpired led to a host of particular developments. This collective acceptance was not necessarily a mistake, but it was far from inevitable.

Meanwhile, the way art was being displayed was undergoing a series of upheavals. Formal academic salons still dominated in late 19th and early 20th centuries as places of commerce, patronage, and criticism. The values of aristocratic and bourgeois society were reflected in the beauty, harmony, and order of academic style paintings. In 1881 the state sanctioned salon was privatized and renamed Societé des Artistes francais. A small circle of artists judged the work, which was seen as the arbiter of French taste. As a reaction to the cloistered approach of the official salon, the Salon des Indépendants, a vehicle of the Societé des Artistes Indépendants, was created in 1884. Based on notions of freedom, independence, and individualism, there were no judges or juried awards, and the exhibition was theoretically open to anyone (3).

It was precisely this openness that Roland Dorgelès and his band of Lapin regulars intended to exploit. If the exhibition was open to anyone, why not a donkey? The prank also served as a pointed critique of Fauvism, which had just risen to prominence. Critic Louis Vauxcelles, upon seeing the Salon d’Automne in 1905, remarked, “Donatello au milieu des fauves!” (Donatello among the wild beasts!), referring to a Renaissance statue displayed among the radical new canvases.

Fauvism, as the movement came to be known, featured vibrant color and brushwork so bold it was compared to wild beasts. Matisse, considered the primary Fauvist, defined it as “the courage to return to the purity of means.” The Fauvists got rid of symbolist literary aesthetics, embraced bold color that no longer needed to describe reality, and chose subjects that elevated the chaotic beauty of nature (4).

It’s no accident that Lolo’s Sunset Over the Adriatic was created in the wake of Fauvism. Fauvism, more than any other movement of painting, is anthropomorphic. Artists were moving back toward nature, both in subject and approach. If Fauvism blurs the line between artists and wild beasts, Lolo pushes this idea to its extreme conclusion. Matisse’s talk of courage in finding a “purity of means” doesn’t seem very courageous compared to Dorgelès and Lolo’s gesture. If we want art to reconnect with natural processes, what could be more pure than eliminating the human artist altogether and letting the wild beast create?

Coming up in Part Two, Duchamp’s Game of Chance

2. Weisberg, Gabriel P. Montmartre and the Making of Mass Culture

3. Leighton, Patricia. The Liberation of Painting: Modernism and Anarchism in Avant-Guerre Paris