Last week I wrote a brief, informal post about my first impressions of the Kendall MFA show, which is now on view. The post accurately conveyed my overall feeling after a cursory viewing, but it was hardly a considered review. I’m working to make time to dig into a few of the artists’ installations and write something with more substance. All the MFA grads should be very proud of what they accomplished, and they all produced work that’s worthy of serious consideration, even if the resulting critical positions aren’t always positive.

For his installation “I Am Not Who You Think I Am”, Salvador Jiménez Flores presents a series of fired clay mask self portraits hung in a line along two adjoining walls. There are fifteen masks on the walls, framed by painted strips mimicking Aztec frieze patterns rendered in a clay wash. Beneath each mask is a cursive inscription in clay wash, in Spanish, English, or some combination of the two.  There are also several small shelves topped by vitrines containing other small sculptures. In the center of the floor is a low pedestal with another clay mask, this one facing up amid a plane of clawed and mottled clay. From somewhere above the pedestal there’s a sound element, an echoey male voice on a loop that asks, “Who are you?” “Who am I?” and other simple questions about identity. There’s also a shelf with a vitrine that contains a stack of books, including The Location of Culture by Homi K. Bhabha, The Souls of Black Folk by W. E. B. Du Bois, and Mixed Blessings by Lucy Lippard, among others, which seem to crush a clay depiction of the artist’s head. 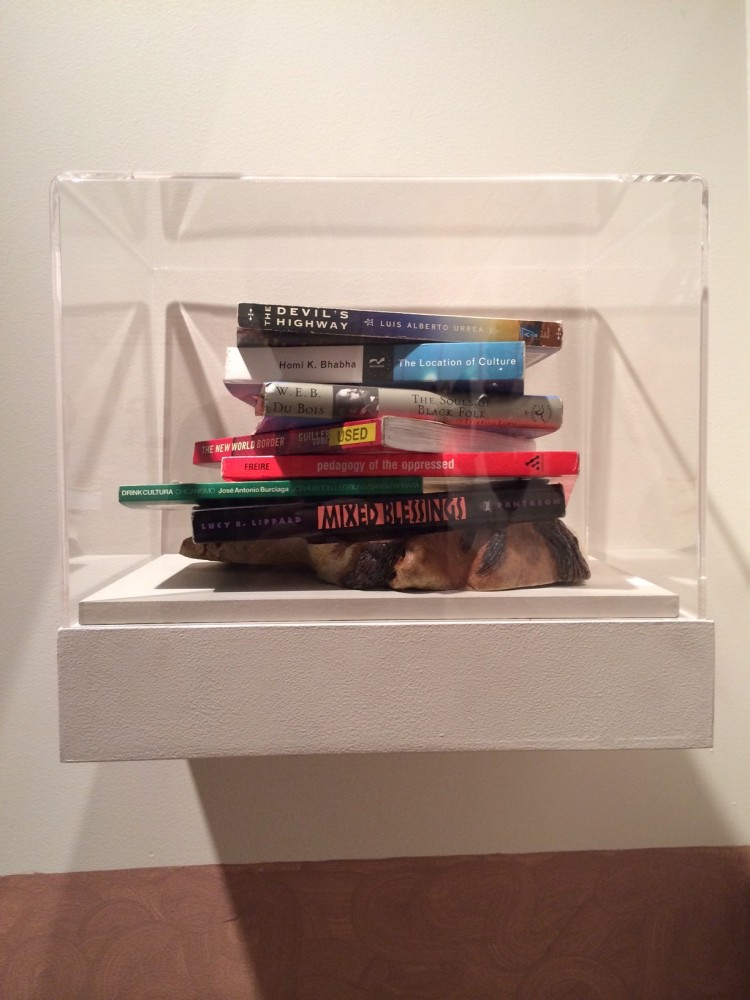 The masks are the star of the show, and they are masterfully made. They seem to be the result of a casting process which is then altered and distorted by adding facial hair, embedding objects, cutting, other interventions. There’s a wide variety of glazes, paints, and other materials incorporated which give them an incredible range of color and texture, while maintaining an overall cohesion. The installation, the artist statement informs us, reflects Jiménez’s experience of dual identity as a Mexican-born artist in living in the United States. He thinks in two languages and experiences a sense of double consciousness. This is reflected in the masks, which are informed by both Mesoamerican and European traditions. They strike a balance between Aztec masks and Olmec heads on one hand, and European death masks and Classical busts on the other.

The masks are evocative, disturbing, and funny. Jiménez manages to tap into something very comedic by repeating the faces over and over, showing us both the variety of alterations, and the expressions depicted in each. We get the sense that he’s playing many different roles, and this one-man vaudeville show is an awful lot of work.

The works function both as masks–artifices meant to cover over the face–and as casts, a verbatim copy of the features of the face. Engaging the mask/cast duality is a brilliant move. He challenges us to figure out which inanimate depiction is the more truthful representation of the artist. Casts, on the one hand, benefit from a one-to-one transfer of features at scale. Each detail and each proportion transfers with all the rest. But the end result is a little too close to life without actually being alive. It ends up in the limbo of the uncanny, teasing us with the familiar recognition of a human face, only to push us to revulsion when its inanimate nature recalls a corpse. Tapping into the uncanny is a bit creepy, and it’s a big part of what makes the faces so successful.

A mask, on the other hand, seems at first to be the more artificial visage of the two. Constructed to adorn and obscure ones features, we’re in no danger of being tempted to see it as a real face. But in their artificiality, masks can reveal a lot more inner truth than bare flesh (or a direct copy of flesh). Masks reflect the fact that we always assemble and adorn a set of features to show ourselves to the world. Masks remind us that there is no version of ourselves that is not an artifice constructed of multiple parts, both by ourselves and others.

Overall, I think the masks work really well, but not everything in this installation works on so many levels, and even some masks seem to hold the others back. There are several aspects of the installation in which the theme of dual identity is made obvious to the point of being heavy-handed. The first culprit is the sound loop. I found it jarring in a bad way. A digital file is a stark and misplaced material contrast with all the rich clay surfaces and colors, this doesn’t feel like a place for looping digital audio files. And it doesn’t really add anything. The artist statement is well written, and even without that, an observant viewer can pick up that this is an exploration of identity, and that the artist is asking who he is, and by extension, imploring us to ask who we are. It’s all in the work, the question doesn’t need to be said aloud.

Similarly, the stack of books crushing the artist’s head seems a little too direct. It seems to illustrate, in a very obvious way, the anxiety caused by the fact that matters of cultural and racial identity are both personal and theoretical. We’re crushed under the weight of history and theory, literally. The mask with the word “trapped” inscribed beneath it is kind of obvious, the rest get us so much deeper without naming the condition so directly.

These elements are a bit like that moment in a movie when the main character says the title of the movie in a line of dialogue. It’s appropriate, but it also makes us squirm because it’s too obvious. The sudden recognition of this makes us aware of both what’s being communicated and the conscious attempt on the part of the artist to communicate it. In other words, we see not only what he’s doing, we see him trying to do it, and this has a way of undercutting communicative power of the work. In film terms, it breaks the suspension of disbelief. In the experience of exploring a visual art installation, I’m pulled from the depth of reflection into a space where I’m reminded that there is a Message here that I am expected to pick up. 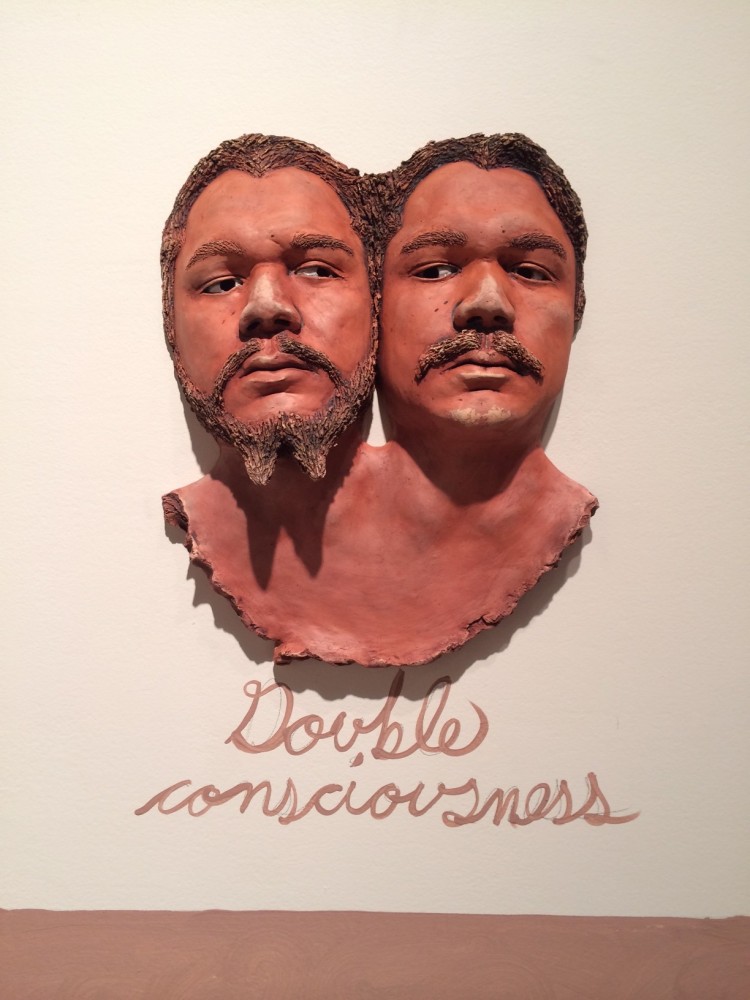 I’m not saying that the work shouldn’t have meaning. What I’m saying is that the meaning needs to be communicated with balance and subtlety. If the work is about questioning identity and feeling trapped by identity, those ideas come across more strongly if they’re baked into the objects in such a way that I arrive at those concepts myself, through my own engagement with the work. The trouble with flat out saying “trapped” and “who are you?” is that it suggests that the artist doesn’t trust the viewer to arrive at these conclusions. The moments where this obviousness is troubling stand out precisely because the majority of the installation does not suffer this problem. By and large, the work contemplates identity, belief, ethnicity, and history with remarkable humor, mystery, and depth. There are only a few moments when it becomes heavy-handed, and these are all the more frustrating because the rest of the work operates so deftly.